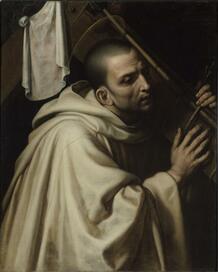 Saint Bernard of Clairvaux, a central figure in the high Catholic civilization of the 12th century, was celebrated by Pope Pius XII as the "Mellifluous Doctor" and the "Last of the Fathers." St. Bernard exemplifies the Latin Catholic tradition as a profound teacher of spirituality in the footsteps of St. Augustine. St. Bernard was a contemplative who taught that union with God is our final end and that God is the prime mover in effecting that union. St. Bernard shows us why Mass is a sacred action vertically oriented to God. There the priest offers Jesus' sacrifice to God the Father for our sanctification; and we Christ's faithful join heart and mind with the priest's offering and thus dispose ourselves for communion with God and with our brothers and sisters through the Body of Christ.  St. Bernard's effectiveness as intercessor is evidenced in the Divine Comedy of Dante Alighieri (Paradiso, Cantos 31-33), wherein Bernard appears at the very pinnacle of heaven as the preeminent singer of the love of the Virgin Mary, interceding with her to obtain for Dante the beatific vision of the Holy Trinity.

This painting of St. Bernard Carrying the Instruments of the Passion (Jeronimo Jacinto Espinosa, 17th century) is in the collection of Vassar College, Poughkeepsie.
​It is due in part to St. Bernard's presence in our community through this image of austere beauty that the Latin Mass Society of the Hudson Valley was moved to embrace St. Bernard as its patron saint.

Saint Bernard on Progressing in Love

Here, from a letter of St. Bernard to the Religious of the Grande Chartreuse, is a distillation of Bernard's teaching on progress in love:
​"Because we are flesh and blood born of the desire of the flesh, our desire or love must start in the flesh, and it will then, if properly directed, progress under grace by certain stages until it is fulfilled in the spirit for 'that was not first which is spiritual, but that which is natural; afterwards that which is spiritual', and we must first bear the image which is earthly and afterwards that which is heavenly.  At first a man loves himself for his own sake.  He is flesh and is able only to know himself.  But when he sees that he cannot subsist of himself, then he begins by faith to seek and love God as necessary for himself.  And so in the second stage he loves God, not yet for God's sake, but for his own sake.  However when, on account of his own necessity, he begins to meditate, read, pray, and obey, he becomes accustomed little by little to know God and consequently to delight in him.  When he has tasted and found how sweet is the Lord he passes to the third stage wherein he loves God for God's sake and not for his own.  And here he remains, for I doubt whether the fourth stage has ever been fully reached in this life by any man, the stage, that is, wherein a man loves himself only for God's sake.  Let those say who have experienced it; I confess that to me it seems impossible.  It will come about, doubtless, when the good and faithful servant shall have been brought into the joy of his Lord and become inebriated with the fulness of the house of God.  For he will then be wholly lost in God as one inebriated and henceforth cleave to him as if one in spirit with him, forgetful in a wonderful manner, of himself and, as it were, completely out of himself." 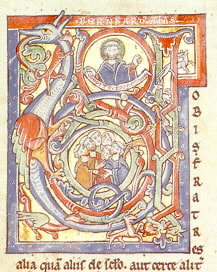 ​St. Bernard on "The Grace of Loving-Kindness" ~ from On the Song of Songs  (Sermon 12)

....But there is another ointment, far excelling these two, to which I give the name loving-kindness, because the elements that go to its making are the needs of the poor, the anxieties of the oppressed, the worries of those who are sad, the sins of wrong-doers, and finally, the manifold misfortunes of people of all classes who endure affliction, even if they are our enemies.  These elements may seem rather depressing, but the ointment made from them is more fragrant than all other spices.  It bears the power to heal, for "Happy the merciful; they shall have mercy shown them."  A collection therefore of manifold miseries on which the eye rests with loving-kindness, represents the ingredients from which the best ointments are made, ointments that are worthy of the breasts of the bride and capable of winning the Bridegroom's attention.  Happy the mind that has been wise enough to enrich and adorn itself with an assortment of spices such as these, pouring upon them the oil of mercy and warming them with the fire of charity !  Who, in your opinion, is the good man who takes pity and lends, who is disposed to compassionate, quick to render assistance, who believes that there is more happiness in giving than in receiving, who easily forgives but is not easily angered, who will never seek to be avenged, and will in all things take thought for his neighbor's needs as if they were his own ?  Whoever you may be, if your soul is thus disposed, if you are saturated with the dew of mercy, overflowing with affectionate kindness, making yourself all things to all men yet pricing your deeds like something discarded in order to be ever and everywhere ready to supply to others what they need, in a word, so dead to yourself that you live only for others -- if this be you, then you obviously and happily possess the third and best of all ointments and your hands have dripped with liquid myrrh that is utterly enchanting.  It will not run dry in times of stress not evaporate in the heat of persecution; but God will perpetually "remember all your oblations and find your holocaust acceptable." 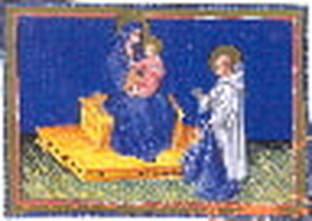 St. Bernard, in Paradiso 33, the last canto of Dante's Commedia Divina, addresses this prayer to the Virgin on behalf of Dante himself:

Virgin Mother, daughter of thy Son, lowly and exalted more than any creature, fixed goal of the eternal counsel,
thou art she who didst so ennoble human nature that its Maker did not disdain to be made its making.

Geoffrey Chaucer translated and adapted St. Bernard's prayer for the Prologue to the Second Nun's Tale in the Canterbury Tales.  Here is Chaucer's Invocacio ad Mariam:

Thou Mayde and Mooder, doghter of thy Sone,
Thow welle of mercy, synful soules cure,
In whom that God for bountee chees to wone,
Thow humble, and heigh over every creature,
Thou nobledest so ferforth our nature,
That no desdeyn the Makere hadde of kynde
His Sone in blood and fleesh to clothe and wynde.

This scene is depicted in the small painting above, by Giovanni di Paolo (ca. 1440's).

The Earliest Known "Lactatio" Image of the Virgin and St. Bernard 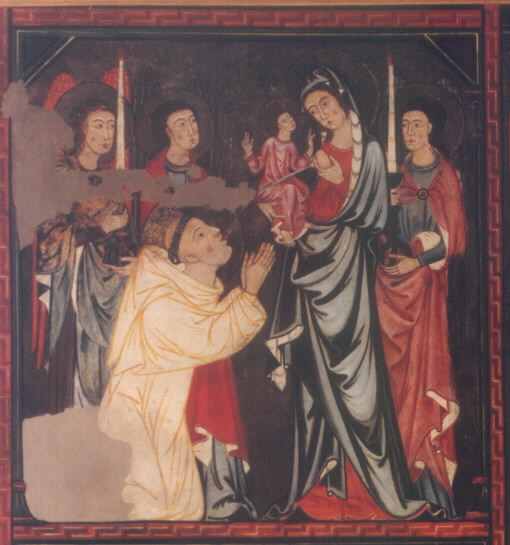 ​The Spiritual Authority of Saint Bernard

Abbe Theodore Ratisbonne, a 19th century biographer of St. Bernard, recounting the spiritual authority of St. Bernard gives this astonishing discourse on the nature of miracles:

Miracles are striking indications of the restoration of man to his preternatural status; they remind us of the power which he received from the beginning over nature, which he was called to command in the name of his Creator.  This power, this high prerogative, may be regained by all men; for all, by virtue of the creating word, bear within them the power which rules the elements, governs creatures, and commands the earth.  But this power is latent, degenerated, and confined; and the noble master of all creation, the dethroned king of all earthly beings, has fallen by Original Sin to a level with those creatures whom he had been appointed to govern, and into dependence even upon those whom he had been appointed to set free.  Hence, as St. Paul says, the groaning of all creatures who were sighing after their deliverance, and waiting for the manifestation of the children of God; hence, the wearisome labor of liberation and purification which man has to accomplish in each; and in proportion as he raises himself to a restored harmony with his eternal head, he recovers, with the gift of God, his glorious prerogatives and enters again into a participation of the Divine omnipotence.  O sublime destiny of man!  As soon as Divine love is born again in his soul, he finds in this love all knowledge, all virtue, all power!  The kingly sceptre is restored to him; and, enriched with a crown of light, he exercises, with full and invincible authority, the high functions of pontiff and ambassador of the Most High.  Such was St. Bernard:  the world obeyed him, and the spirits of this world trembled at his words; the angels themselves, those who fell together with the prince of pride, bore witness to his sanctity, and feared him as one of the judges who shall come with the Sovereign Judge to carry out the sentence of the last day.